It being a new year and all and whatnot and so forth I've decided to officially make the jump and move all of my old Livejournal posts over to Dreamwidth. I've had an account for years, and technically was crossposting from Livejournal to Dreamwidth, but I had really about given up on Livejournal, AND I never bothered to check that the crossposting was working.

So now I'm gonna see if I can get Dreamwidth to crosspost in the other direction, and see about setting things up here. No guarantees that I'm back to stay, but we'll see.

I made a tactical error with my last post. I had been thinking, abstractly, that I should start posting livejournal updates again, and had planned to do that starting right after my 'we are here' post.

What I hadn't been considering (basically because its the sort of thing I try not to think about) was what a bad headspace I was in at that time. I was hurting badly, but I don't believe in talking to others about my hurts because I don't find that spreading it makes it better. It just makes other people hurt too, and then I hurt more because on top of my troubles I've gone and hurt my friends. So, for me, talking about it makes it worse. Empathic people who *really* want to help, only make it many times worse.

So, basically I had nothing I wanted to talk about that I was willing to talk about. Hopefully things will be changing a bit from now on, as I hope I'm over the worst of it, for now.

Rumor has it that LJ has been bought out by someone who plans to do a lot better maintenance and upkeep than has been the case for the last few years. Not sure if this dying behemoth can be brought back to life, but I wish the project well.

I just wondered how many folks are still around. Why not everyone who reads this post a message to your LJ that you are still around, still exist, and lets see if there's any community left here. So like the Whovians from Horton Hears a Who

Once upon a time, ages ago, long before Wikipedia. Before even the web, I used to try to invent four-set and five-set Venn diagrams. They were intended for things like mapping the quasi-elemental planes in D&D, or for coming up with new alchemical systems for D&D. I never succeeded. Today a quick google search produced this: 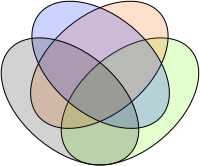 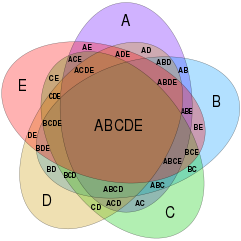 The reason the 5-set version looks better is that 5 is prime, and there are only nice solutions with rotational symmetry for prime numbers of sets. Not that said solutions are easy to find. I was reminded to look up symmetrical Venn diagrams because they now go up to 11, but with 11 sets, there are 2^11-1 = 2047 intersections, so its kinda complex:

After having gone through a number of trials and tribulations, I think I finally have the hardware for the Ten Ton Tabulator sorted out. That's the name I finally gave to the 12 TB backup server I bought recently, mainly because its the heaviest computer I've ever owned, and the heaviest that the store has ever sold. The dang thing must weight 50+ Kg.

Now that it seems to provide reliable storage (two raid 6s) I just need to make USE of the damn thing. In the long run, this is likely to cause me to upgrade my internal network to gigabit speeds, otherwise it will take *forever* to backup all the house systems.

For the moment I am testing things out with an "easy" case: backing up my main computer and laptop. Only this turns out to be far from easy, as I seem to have 4 not-necessarily exclusive categories that a file might want to be in:

Seeing as my laptop runs 3 different OSes (Gentoo for customizability, Ubuntu 10.04 LTS for work, and Win7 for games), while my Desktop runs 6 at last count (my dev environment plus one each of the target distros for my work software), and there are a large number of development files that need to be sync'ed between my laptop and dev system, especially when I'm on a business trip, it all gets kinda... messy.

So right now I'm going through my desktop and my laptop and moving files around so that they are in folders that make the above classifications clear, so that I can setup automated backup and sync services. This involves a large amount of reconfiguring software, as things move around, and in some cases rebooting a number of times to ensure that the software in every OS I run agrees on where the files have been moved to. Oy.

So, suddenly I'm gonna be in Calgary for 4 days and, once again, nobody I know there is going to be in town or available. :-/

I usually love to travel, but I'm not really looking forward to this trip. No particular reason why; I just don't feel very motivated to fly half-way across the country at the moment.

Yeah, I moved over to facebook, and I've been neglecting my LJ. Which is a shame because FB doesn't really keep anything like a chronological journal of events that I can look through later.

Much of the previous gap in my journal has been me being really depressed, which is another reason I just stopped writing. I don't want to write about being depressed any more than folks want to read about it.

All that changed last April (almost a year ago now), when I finally got a full time job with people who actually seem to respect my skills and experience. Feeling like I'm useful has certainly helped, and the money (although not great) is far better than no money. Getting rid of the continual anxiety caused by monthly bills I can't pay has been a major relief as well.

Yesterday, we finally got the inheritance from Linda's mom's estate. Its been delayed so many times I was wondering if we would ever get it, so I didn't want to mention it and jinx anything. Now that its actually here though, we can consider replacing the car, which has been on its last legs for quite some time now, and getting a much newer and more intact model. Somehow I suspect the next car will be another Volvo as both Linda and I have been very happy with that brand.

Went and got myself a Google+ account. Still undecided as to how it will ultimately stack up against Facebook, but I think it has real potential.

I learned yesterday that, Liz Metcalfe, one of my oldest friends was killed while riding her motorcycle. An oncoming vehicle crossed the center line causing a massive multi-car pile up resulting in several injuries and deaths.

I don't have words to describe how much I'm going to miss her.

Given the title of the episode, I thought the latest Doctor Who episode would be about River Song. Boy was I wrong. Neil Gaiman wrote the episode and he decided to delve into the character of the Tardis. Strangely enough, I've been mentally writing an episode that did the same thing, for some time. Neil Gaiman's take was completely different than mine, and roughly two orders of magnitude better. I guess that's why he's a world renowned writer and I'm not.

Suffice it to say that I absolutely loved the episode although I had to keep pausing it and replaying bits to get all of the dialogue, some of which I found hard to make out. Its also quite evident that Neil Gaiman has got to be completely mad (in a good way) in order to be THAT creative in his writing.
Collapse